Atmosculator is a freeware Mac OS X application that calculates key properties of the Earth's atmosphere as a function of altitude using the 1976 Standard Atmosphere Model. It can be used to determine the pressure, temperature, density, viscosity and other parameters up to an altitude of 278,385 feet (84.852 km). The 1976 model is the latest of a number of versions developed jointly by NOAA, NASA and the USAF. The complete model includes properties at even higher altitudes, but these regions are more complex and are not included here.

Atmosculator also provides the option of calculating properties under non-standard conditions - i.e. when the temperature differs from that of the standard model.

Although the values provided by Atmosculator have been carefully checked against the original U.S. Government source, their accuracy cannot be guaranteed, so please use this tool at your own risk.

Atmosculator includes extensive Help on the basis of the model and a mathematical derivation showing how the properties are calculated. For your online convenience, this description of the Standard Atmosphere Model is reproduced here. 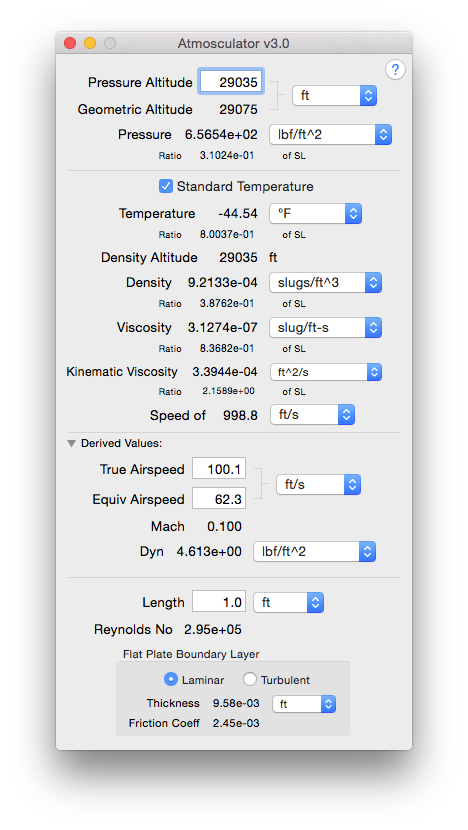 Notes:
1) None - see version history below

Note that 2.04 is a PPC-only version but should work correctly on any Intel Mac that has Rosetta.
Apple discontinued Rosetta with the release of OS X 10.7 so you cannot use v2.04 on this or later versions of OS X.

If you have feedback, suggestions, questions, or would like to be notified when new versions are available:
atmosculator @ icloud . com